2021 American Turkish Society Gala Dinner took place on Tuesday, October 26th at the Plaza Hotel and honored Mica and Ahmet Ertegun for their extraordinary achievements in music and philanthropy with entertainment by Foreigner, Jordan Khan Orchestra, and Burhan Ocal. 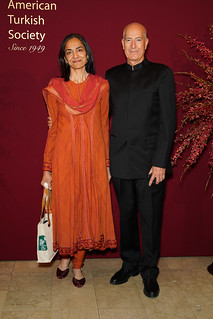 As chairman of ATS for over 20 years until his death in 2006, Ahmet Ertegun’s great passion for a diplomatic and cultural alliance between Turkey and the United States was only matched by his extraordinary love for American popular music. Ertegun was instrumental in ushering in the careers of such stars as Ray Charles, Otis Redding, Wilson Pickett, Aretha Franklin, Sonny and Cher, Bette Midler, and many others. He and his brother Nesuhi stood courageously against inherent racism towards any artist. Later, Ahmet also recognized the genius of such British groups as the Rolling Stones, Led Zeppelin, and others early, and signed them, too. Always on the lookout for outstanding talent even later in life, his final discoveries ranged from Kid Rock to Keke Palmer. Ahmet was also an ardent philanthropist, and funded chairs in Turkish Studies at both Georgetown and Princeton University, the latter in memory of his brother Nesuhi.In 2007, proceeds from the Led Zeppelin reunion tribute concert made up the core of the Ahmet Ertegun Education Fund, which has provided scholarships in the US, UK, and Turkey. In the same year, ATS funded the Ahmet Ertegun Memorial Scholarship at the Juilliard School for Music.

Mica Ertegun is an internationally celebrated interior designer and philanthropist. In 2012, she funded The Mica and Ahmet Ertegun Graduate Scholarship Programme in the Humanities at the University of Oxford to provide 25 annual scholarships in perpetuity. Since its launch, over 115 Ertegun Scholars have graduated from the university. In 2012, she also funded the Mica and Ahmet Ertegun South Agora Pool project in the ancient city of Aphrodisias to excavate the pool, which dated to the early first century AD. In 2015, Mica designed and funded The Mica and Ahmet Ertegun Atrium at the Jazz at Lincoln Center for jazz lovers to meet and enjoy the programs of the Center’s Orchestra. The inaugural concert was headlined by Aretha Franklin. The following year, Mica’s lead gift to the World Monuments Fund allowed the resumption of the previously stalled restoration of the Aedicule inside the Church of the Holy Sepulchre in Jerusalem’s Old City. The Erteguns have been exemplary in every way—immigrants who embraced the identity of their new home, while never forgetting their past, and forever building bridges between the two with open hands and charitable hearts.

The beneficiaries of this evening will be the various programs The American Turkish Society has been organizing to further the business, educational and cultural ties between our two countries such as the Turkish Investment Forum (an important investment conference held for the US corporate and institutional investors interested in Turkey), our “Meet the Ambassadors” series (a program where American and Turkish Ambassadors periodically address issues of current relevance in the US-Turkey relations), the Turkish Film Festival in New York (a landmark cultural event) as well as scholarships and grants we provide in the fields of both education and the arts including our Moon and Stars Project Grants and Promising Turks Fund. All our programs serve as a gateway to deepen the dialogue and the understanding between the U.S. and Turkey and now more than ever, we are fully committed to promoting, confirming and celebrating the strategic relationship and historical friendship between our two countries.